My house is so cluttered.  Last night I dreamed that we were robbed.  Everything was gone, even applicances and furniture.  All that was left was the actual house.  My reaction?  "Now I can clean the floors!"  Mmmhmm.
Posted by Rima at 5:06 PM No comments:

My Brush with Death!

So there I was, sitting on the edge of my bed while contemplating my upcoming shower, as I am wont to do, when I heard the distinct sound of helicopter rotors.  Now, I know that I don't own a helicopter, and certainly not any that operate indoors, so that was odd.  THEN I SAW IT.

It was a massive flying creature that I've never seen before, that may or may not have had a laser stinger. It looked like it could take me down in a flurry of evil, so I ran out the door, slamming it behind me, screaming for my daughter to bring up the big guns.  This called for nothing less than The Hoover.

Unfortunately, I had to actually go into the room to plug it in.  The children huddled silently down the hall as I opened the door a small crack.  It was no longer flying around.  It could be anywhere.  What if I stepped on it with my bare feet on the way to the outlet?  What if it was just waiting to ambush me?  There are no what ifs in life.  You either go in, or you don't.  I went in.

Being that it was the size of my grandma, I spotted it quickly and easily.  It was perched upon the ceiling fan, confident and unafraid.  I fired up my weapon and my courage almost failed me when it demonstrated that it was no simple pantry moth, and a little air current posed no challenge to it.  It took off, and I started screaming.  The children started screaming.  I chased it with the hose, but it easily flew out of the line of suction.  It landed back on the ceiling fan, and the scenario repeated itself, with the children and me screaming the whole time.  Then it flew behind the bed.

I had visions of it creeping up during the night and eating my brain out through the hole it had bored in my skull with its stinger.  Fortunately, it was just sitting there on the boxspring.  This time I got it.  I GOT IT!!!!!!  Cheers erupted from the crowd of onlookers.  I kept the vacuum cleaner on for several minutes, lest it use its unnatural size and strength to crawl back out.  So far so good.

I wish I had a picture of it, but that just wasn't going to happen.  You can probably find an image of it by googling for "Giant Motherfucking Bug of Death".   If you see one, run.
Posted by Rima at 8:25 PM No comments:

So yet another crazy dream starring Hugh Jackman. His little sister was getting married, and she put him in charge of the cake. He asked me to go with him for the tastings and help him out, so I did. All the cakes were gorgeous and delicious, but he thought they were all crap. He finally admitted that he doesn't like cake, so it didn't really get anywhere.

Meanwhile, we were accompanied by his pet squirrel. Said pet was adorable until he suddenly lurched at my foot (I was wearing flip flops) and sunk his teeth and claws into it. Hugh was unable to get the squirrel off my foot, so he told me a hot bath would make me feel better. I thought he was crazy, but he said "trust me". So I got into the bath and after a minute or two, the squirrel drowned and let go of my foot. Hugh came in and fished it out and said "See? All bettah!" with his usual Hugh grin.

I went to my first board meeting last night. I still have no idea who nominated me, or why. Anyway, they were talking about things like endowment funds, consulting contracts, etc., and I just kind of wondered what I was doing there. It's not that I'm not useful. I can write jokes, knit all kinds of things, and pour stuff into a bottle without using a funnel. Perhaps one of these skills will come in handy at one or two meetings. I'm figuring that this will be good practice in case I ever become an adult. Oh, and did I mention that I have a vote on every decision? Wish us luck.
Posted by Rima at 6:53 PM 2 comments:

When your husband is under the sink at 11 at night, trying to fix it, and mumbles to himself "aw this is gonna be expensive", that can't be good.

And you know how the Drano label says to rinse immediately if you get it on your skin? Yeah, do that, even if your husband finds it "cool" that your flesh is dissolving in a weird manner.
Posted by Rima at 10:19 PM No comments:

I saw this in the supermarket. When the Hebrews were wandering through the desert and ran out of food, Moses told them to put out their baskets, and God made baked ziti fall from the skies. I'm noting the "complete idiot" part of the title. Hmm... 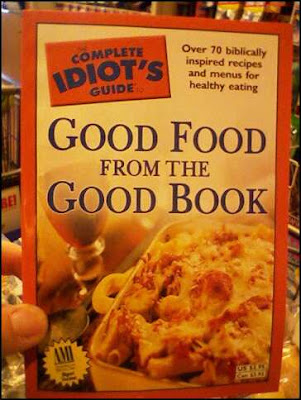 I feel that I should let the world know that there is no such thing as prune juice. The whole point of prunes is that they have no juice. If they did, they'd be plums. So why isn't it called "plum juice"? I think it's actually prunes that are ground to dust, then mixed with water. It really should be called "prune suspension". Doesn't the FDA check this stuff?

Of course, I don't drink prune juice, so whatevs yo, but I thought I'd perform this public service.
Posted by Rima at 10:53 AM 1 comment:

Last night I dreamed that Craig Ferguson paid me big bucks to stay home and tell my cat jokes all day. The cat would laugh and tell me jokes back. It was awesome. Then one day I overheard my grandmother speaking to my mother. She said "That girl is not quite right". She said I imagined my cat telling me jokes, and that if I kept this up, I would have no future except in a mental institution. My mom just shrugged.

I was concerned, so I asked Craig, "What if my cat isn't really telling me jokes? What if I'm just imagining it?" He said he didn't give a shit, because either way it was hilarious. I asked him if he knew Lizzy. He said no, and I was shocked. Then Craig and I made out on a bus on the way to a giant puppet parade in Soho.

WTF? Even I'm shaking my head at this one.